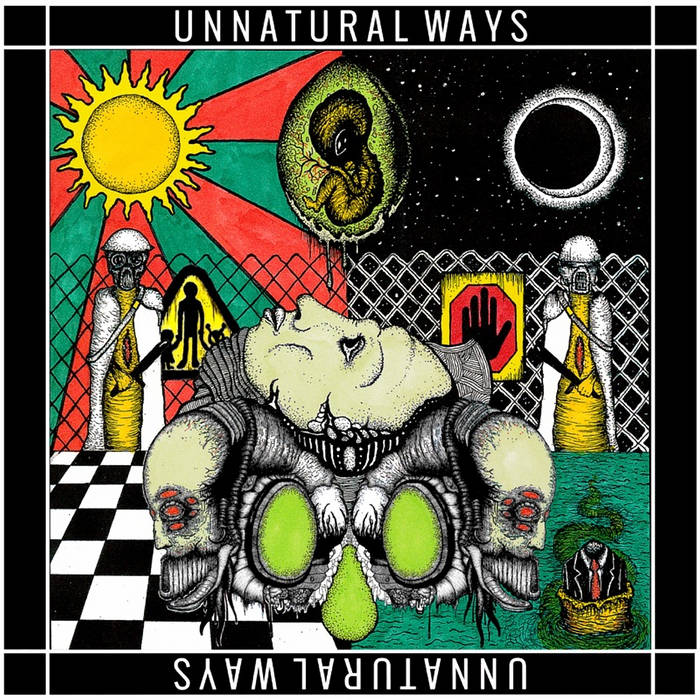 Bob Ross This will help you decrease your caffeine intake! Favorite track: Trying to Pass.

Peter Hoff What a foxy, intelligent power trio record...the 'Axis:Bold As Love' for our time? Favorite track: Most of All We Love to Spy.

With a background in classical guitar, Unnatural Ways founder Ava Mendoza has wowed listeners across genres, channeling her blazing technique toward the outer edges of jazz, noise-rock, and metal. Inspired equally by Sonny Sharrock, The Butthole Surfers, and Morbid Angel, Mendoza's musical prowess has led to collaborations with a long list of living legends in the avant-music sphere and beyond: John Zorn, Nels Cline, Carla Bozulich, Fred Frith, Violent Femmes, and more.

Mendoza formed Unnatural Ways in Oakland, California in 2012. Largely instrumental, the band's first two albums were released on New Atlantis Records and John Zorn's Tzadik label, respectively. Like Keiji Haino, or the most experimental moments of Black Flag, chewed up and spit into deep space, the sound was bluesy and epic, whilst complex. Mendoza relocated to Brooklyn in 2015 and Noisey reported this shortly after her arrival:

"As guitarists like Mick Barr and Brandon Seabrook lead the charge as purveyors of melting jazz and metal into fret-spinning wizardry, it’s Brooklyn-via-Oakland six-stringer Ava Mendoza deconstructing of blues and punk into brutal shredfests that’s causing a ruckus in NYC’s DIY hubs."

Unnatural Ways' upcoming third album, The Paranoia Party, heralds a new chapter in Mendoza's story: it is the first album to feature her vocals as a central element in every song. A guitarist for 27 years, Mendoza has finally brought her vocals to the forefront, singing with a sweetly commanding wail that evokes Siouxsie Sioux. Perhaps it is no coincidence that she chose this point in time to do so – The Paranoia Party's lyrics tell a sci-fi tale that is relevant and crucial to the news of today. In Mendoza's words, it is about "aliens and being alien; political paranoia, inclusion, exclusion, migration, immigration, border crossing, alter egos and alternate realities."

Track 1, "Go Back to Space," sets the tone: surf punk descends into metallic prog freakouts, carried along by the warmth of Mendoza's vocals. It is a bewitching balance of dread and euphoria, which is precisely the vibe Mendoza illustrates when explaining the album title: "The title, The Paranoia Party, refers to finding celebration within the state of tension and fear we are living in."

Cannibal Corpse's George "Corpsegrinder" Fisher stops by for an interview